I'm sure this thread already existed, but I couldn't find it!

Anyway, we need a thread for those food and cooking enthusiasts on the board. Use this thread to talk about your cooking experiences, post pictures of your food and share recipes!

I just made this:

Steamed thai-style sea bass and rice. It was so easy and absolutely delicious!! So much flavour.

You can find the recipe here:

I can't wait to make it again and try using a mix of different seafood. Definitely going to use some prawns, mmmm.

Seriously, make it! You basically just blend up a few ingredients to make a fucking awesome paste, mix it through some partially cooked rice, and chuck it in the oven with the fish. Takes about an hour with prep and cooking time included.

its pretty much my life

That sounds amazing! I never realised you were so into cooking. Please report regularly to this thread

p.s. we've made a lot of bread since I moved in. Plain white loaves, beer bread, fruit loaf and white loaves with added ingredients like olives, rosemary, sundried tomatoes and more. So much fun experimenting! There's a lot of trial and error involved, but I love the process and there is nothing better than eating a piece of freshly baked, still warm bread dipped in some olive oil and balsamic. Mmmm.

Do you have any bread tips? Favourite kinds of bread to bake?

bread is amazingly satisfying to make 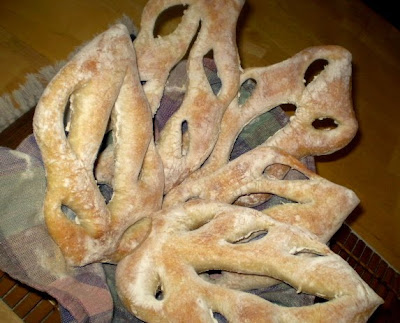 here is a pretty good recipe that uses chorizo which is great because the red oil bleeds into the dough
http://www.bbc.co.uk...and_thyme_65587

so true about the satisfaction! and fougasse looks amazing - definitely have to try it. Plus, anything with chorizo is delicious.

in the dark hours, with half-words whispered low

anyway i'm thinking about making soup tonight. gonna start with chicken stock. i think leek, turnip, carrot, onion, barley and maybe some white beans. white beans are like the only bean i don't have in my cupboard right now, but i have to buy the barley and turnips so i might as well get those too. and some french bread (sorry ron i just don't have time to bake bread rn :[ ).

its pretty much my life

I just pictured if you had your own cooking show.

on the real though, i want to get into some cooking skillz once i get married/have my own home etc/ready to be a mom

until then, RAMEN NOODLES 4 LYFE

there are still scales on that fish, gross.
learn to clean your catch

there's a swanky restaurant in atlanta called JCT's kitchen, and their main appetizer has been on at least 2 food network shows
it's called angry mussels, and they are INCREDIBLE. I found a recipe very similar to what they use at JCT's, but they use benson's bacon which is some top notch pork, so a home-made version will never taste just as good as theirs

first you render the bacon down until it's rather crispy. then remove the bacon, add the butter, and sautee the garlic, red onion, serano and the whites of the scallion in the grease. once everything is about cooked, you can add in your optional spices.

Next, add the white wine and mussels to the mixture and turn the pan on hot. Put the lid on it and let it simmer for ~5 minutes. Put in a deep serving dish and add the bacon and scallions.

At first when I saw the recipe, I thought it would need more liquid than it did, but the mussels release a good amount of juice that mix with the other flavors incredibly well. And of course, the bread is for dipping in the incredible sauce once you are done with the mussels

yeah i know i wanted to use gruyere but I'm poor

gotta use what you got in the cupboard

parmesan works fine in this case

surprisingly enough, i love cooking, but i hate doing that only for myself :/

anyway i'm thinking about making soup tonight. gonna start with chicken stock. i think leek, turnip, carrot, onion, barley and maybe some white beans. white beans are like the only bean i don't have in my cupboard right now, but i have to buy the barley and turnips so i might as well get those too. and some french bread (sorry ron i just don't have time to bake bread rn :[ ).

swiss cheese in french soup?? what the hell, salmon!

there are still scales on that fish, gross.
learn to clean your catch

there aren't any scales, it's just skin.

I tried looking for it but I don't remember what it was called. I searched 'cooking', 'food' and 'recipe'. Nothing. You find it.

i'm trying to come up with a sexual come on related to cooking
for leanne, but i nothing is working in my brain at the moment


Back to Drunkship of Lanterns